We would like to say another huge thank you to Doris Banham Rescue for taking on these two guys! 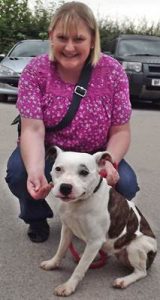 Sharon from Doris Banham with Lou

Lou was brought into us originally through St Helens dog wardens on 20/06/2016 Lou was ID chipped but unfortunately we weren’t able to get in touch with registered people on her micro chip. After her 7 days Lou went up for adoption on 27/06/2016 unfortunately during that time no one has offered Lou a home, so we’ve contacted Trudie of Doris Banham Rescue and she has kindly offered Lou a place with them. 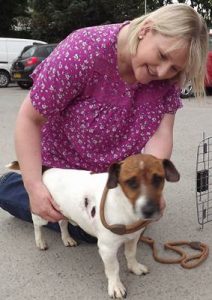 Sharon from Doris Banham with Sid

Sid was brought to us originally through Leigh & Wigan dog wardens on 01/07/2016 Sid unfortunately wasn’t ID chipped and no one come forward to claim him. After the seven days Sid went up for adoption on 08/07/2016 and was adopted on 14/07/2016 but unfortunately had to be returned due a behavioural problem. So Doris Banham have offered him a place along with Lou.

Once again a massive thank you to Doris Banham for taking these guys on! We shall look forward to keeping in touch Sharon, Trudie and Co to see their progress.